Wim Maas
Wim Maas is a lecturer at the Department of Accountancy at Tilburg University, The Netherlands. His interests include the implementation of distributed ledger technology for financial accounting and reporting purposes.

At the end of last year, on 20 December 2017, Charlie Lee sold all the litecoin (LTC) he had accumulated since founding the Litecoin Network in 2011. The reason he provided is a “conflict of interest”, pointing at market reactions on his tweets and public appearances making him able to influence the price of his own coins. It is the first time a lead developer of a leading cryptocurrency decides to sell off all of his holdings and the decision is widely criticised. The incident raises an interesting new dilemma on whether or not developers of  decentralised organisations (DAOs) should hold the token of the project they are involved in. I call it Charlie’s Dilemma.

Conflict of interest or alignment of incentives?

Agency theory predicts that in traditional organisations the problem of separation of ownership and control can be mitigated by the CEO owning shares in the company. This way his incentives are more aligned with the incentives of the owners (shareholders). However, a DAO is not a traditional organisation. Litecoin holders are not shareholders and Charlie Lee is not a CEO. Holders however do derive value by the developers’ efforts and investors have often posed they want developers to have “skin in the game”. Since we are navigating grey areas right now it begs the question whether Lee’s “conflict of interest” argument really weighs up against having “skin in the game”. 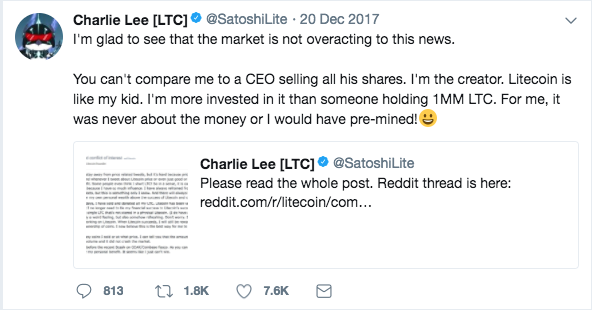 Charlie Lee as a developer

To answer the abovementioned question we must look at Charlie Lee’s role in the decentralised organisation. Although the former Google employee created Litecoin, he is first and foremost a developer and in that sense no different from any other developer working on the Litecoin Network. At the moment the core development team of Litecoin consists of about 15 members, but then again anyone can contribute to the project and be a developer since Litecoin is an open source project under the MIT/X11 licence. Unlike other blockchain projects, such as Dash, contributers are not paid when their code contributes to a protocol change in the Litecoin Network. The only paid litecoin developers (two at the moment) are those paid by the Litecoin Foundation, a non-profit founded with the goal to support the Litecoin project.

So, developers like Charlie Lee are not in any way incentivized to exert effort to improve the Litecoin project. In this respect it is understandable that investors demand that developers have “skin in the game”. The underlying assumption here is that the value of the litecoin currency depends on future protocol innovations. This reasoning is valid since usability is what makes a currency valuable, and the competition between cryptocurrencies in terms of scalability and technology leads to the assumption that more development means more usability.

Charlie Lee as an insider

A more impactful argument angry litecoin holders made after the announcement is that Charlie Lee is more informed than the market. His choice to sell struck investors as a lack of confidence or fear of heights. The fact that the lead developer generally is more aware of inside information makes it even worse.

Combined with the many accusations of insider trading in the cryptocurrency space lately and the lack of regulatory enforcement, this raises interesting questions. To what extent should trading cryptocurrencies with insider knowledge on developmental progress or internal politics be allowed? Not long ago Roger Ver,  the man behind Bitcoin Cash, appeared on CNBC saying “insider trading is a non-crime”  and that people should know what they are buying when investing in crypto. Regulation is not needed in his view. The argument being that all information on the open source software is public.

This however doesn’t fully reflect reality and insiders in a cryptocurrency project or decentralised autonomous organisation could still have an information advantage over regular investors. In that sense it will not be long before regulators intervene.

Despite the transparency of open source projects like this, the market apparently still expects Charlie Lee to be better informed than anyone else on the state of the Litecoin project. In that sense the decision to sell based on his conflict of interest is understandable and prevents any future allegations of insider trading. However, his trade history obviously makes him suspicious anyway. Therefore, I call it “Charlie’s Dilemma”.

Charlie Lee as an ambassador

Charlie Lee as an investor

As an investor on the other hand he did well. According to the donation list, he donated $214,538 to the Litecoin Foundation on December 19, but the exact amount of litecoin Charlie Lee sold for his own benefit is not known. It is estimated to be worth millions of dollars. In a 2014 post on reddit he told most of his holdings came from CPU mining in the early stages of the blockchain’s network and from buying them on an exchange for $0.007 each. Even though he sold some since then, he is still believed to have made a gain of around 29,285.00% when he sold his litecoin at an average of $205 each.

To conclude, self-proclaimed “SatoshiLite” did not stick to his 2014-words “I’m holding on to the rest of my coins until I can spend them everywhere!” and this is what the community is upset about. Many investors took the action as a warning of abnormal heights or assumed private information. Moreover, this comes in a time in which the cryptocurrency hype has reached a global level and even Vitalik Buterin, the lead developer of Ethereum, recently questioned whether the cryptocurrency market is worth its market capitalization.

Although the market seemed to react negatively by the Litecoin founder’s announcement late December, the price closely followed bitcoin’s price and the LTC/BTC price was not really affected since. Charlie Lee however did suffer a lot of criticism on Twitter and other media. The current LTC market price is around $129.

Wim Maas is a lecturer at the Department of Accountancy at Tilburg University, The Netherlands. His interests include the implementation of distributed ledger technology for financial accounting and reporting purposes.